Down by the (Green) Bay

Tips and tricks for getting married in one of Wisconsin's most iconic towns
Issue:
Spring/Summer 2017 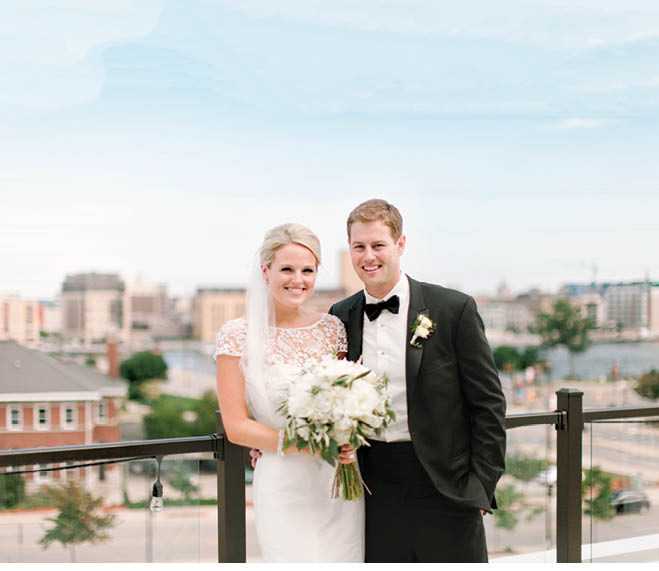 Tracy Le Capitaine and Kristy Wydeven knew Green Bay was the logical place for their June 2016 nuptials. Both are from the area, so family members wouldn’t have to travel far, and planning would be a breeze. But they weren’t entirely sure what their out-of-town guests would do during their destination-wedding weekend. That’s when the surprises started to unfold.

As they scouted venues in downtown Green Bay, a new, lively aesthetic emerged, says Le Capitaine. She had remembered the city as lovable but perhaps not so stylish; now, historic revamped buildings house restaurants, boutiques and entertainment spaces. “I haven’t lived there since 1999. That downtown area, I just love. A lot of things are changing down there. I felt proud and excited to have out-of-town people there, to show it off,” says Le Capitaine.

Her happy discovery: With an abundance of unique ceremony and reception sites and top-notch vendors, Green Bay is a destination worthy of any wedding dream.

With a lively downtown and revamped historic buildings, Green Bay is a wow-worthy destination for brides and grooms. Case in point: venues like Oneida Golf and Country Club that show off the city’s sophisticated side.
Photos by Kate Weinstein Photo

“There’s a lot that’s new and opening here,” says Sunny DuBois of local floral design company Ebb & Flow Flowers. “Brides planning their weddings are going to be surprised by more urban-style venues.” She points to Gather on Broadway, a raw space with exposed brick walls, wood-planked ceilings and concrete floors; The Cannery, an industrial-chic restaurant tucked into a 1917 building that once housed a vegetable cannery; and Titletown Brewing Co.’s banquet space. The Cannery especially has become a popular spot for rehearsal dinners, as has Three Three Five, a private-dining space in the historic Broadway District. “People are thinking outside the box when it comes to rehearsal dinners,” says DuBois.

(Above) Industrial chic venues like downtown’s Gather on Broadway are a blank canvas for couples—decorate it to suit your own unique style. Top notch local vendors like Ebb & Flow Flowers, whose floral designs are seen here, can help.
Photos by Jessica Bedore Photography

Allison Kline-Weichelt, owner of Sash & Bow, a local event planning business, continues to be wowed by the venues she suggests to newly engaged couples who want to wed in Green Bay. “Lambeau Field can totally be transformed to not-just-football, and they have an amazing chef,” she says, adding that the sixth-floor North Loft, overlooking the playing field, is a popular space, with the option of a rooftop ceremony. “You can have a high-end experience or ‘the tailgate experience,’ ” she says.

Green Bay Botanical Gardens offers an all-in-one wedding destination, and you can bring in your own caterer. “Kress Oval Garden is a beautiful, large garden stunning for ceremonies, with a fountain for guests to walk by as they enter,” says Kline-Weichelt.

(Above) Paradise found. Green Bay Botanical Garden offers several different spaces for ceremonies and receptions, all of them accented with heavenly arrangements of flowers and greenery.
Photo by Shaunae Teske Photography

The same all-inclusive concept can be found at Oneida Golf & Country Club, which has gorgeous grounds and is a “great place to have a ceremony, dinner and dancing, all in one intimate place,” Kline-Weichelt says.

Customization is a highlight at the National Railroad Museum, which has been hosting weddings in its Frederick J. Lenfestey Center since 2001. “I had a couple that wanted to get married in a rail car,” says special event coordinator Brian Reignier. “They had people sitting in the seats. There were only about 15 guests there for the ceremony, plus about 200 for the reception in the Lenfestey Center.” The venue’s collection of trains makes for ample wedding entertainment: In warm weather, a train can ferry guests around the property’s 1.5-mile loop, providing transportation between the ceremony and reception—a perk that’s not only unique but also creates a festive backdrop for photos.

For their June 2016 wedding, Jacqueline Rudzinski and Mark Breen found Green Bay vendors eager to tailor their services to the couple’s needs (something they didn’t find to be as true at some of the venues in Milwaukee, where the couple lives). “We just felt like we could come in and make it more unique,” she says, referencing the flexibility of schedules and other itinerary details that, when requested, were instantly honored. “And we knew our money would go further in Green Bay.”

Rudzinski’s roots are in Green Bay. When it came to her wedding at Oneida Golf & Country Club, however, all but 30 of the 260 guests were from out of town. Rented school buses shuttled guests between events. “It was kind of like a mini destination wedding,” she says—their guests came ready to see what Green Bay had to offer.

“We tried to keep as many activities as we could downtown,” says Rudzinski, who went the extra mile to provide guests with a list of recommended must-dos in Green Bay, including the Saturday-morning farmers’ market, her favorite bakeries and ice-cream shops, and Lambeau Field’s Packers Hall of Fame and tour (especially fitting as her father, Paul Rudzinski, once played for the team).

Many of the guests stayed at St. Brendan’s Inn, selling out the entire property and creating a nice home base. “My husband is very Irish,” says Rudzinski, adding that the couple went to the inn’s sister property, County Clare Irish Pub and Hotel in Milwaukee, on their first date. St. Brendan’s was also the site of their rehearsal dinner, followed by a meet-and-greet with cocktails and appetizers at Fox Harbor Pub & Grill’s upstairs patio.

The couple’s wedding day was a blissful gathering of family and friends, featuring a crisp color palette of white and metallic tones with soft, summery floral arrangements from local florist Buds N’ Bloom.

Le Capitaine and Wydeven wanted to keep all wedding activities in downtown Green Bay, so they opted to say their “I do’s” at Meyer Theatre, followed by a reception at Titletown Brewing Co.’s banquet space. Building off of the historic theater’s architectural roots, the wedding had an Art Deco theme, with gold and navy hues and a 1920s-inspired gown for Le Capitaine.

The couple’s 150 guests—many who traveled from the Twin Cities area for the Saturday-afternoon ceremony—enjoyed a weekend in Green Bay, starting with bar hopping on Washington Street on Friday night, and a meal at Vintage Cantina, a casual Mexican eatery that opened next door to the Meyer Theatre in January.

Layers of thoughtful touches were woven into the wedding, thanks to the vendors. Meyer Theatre spelled out “Congratulations, Tracy & Kristy” on the marquee as a surprise for the couple on the day of their wedding—a perfect photo op. For the cake, Le Capitaine sought out local vegetarian and vegan restaurant Kavarna to craft a confection with vegan chocolate, vanilla and buttercream. Then there was the surprise that awaited the couple at the Main Salon the morning of their wedding: bagels and fixings with mimosas, for some pre-wedding pampering.

(Above)Tracy Le Capitaine and Kristy Wydeven wanted to keep all wedding activities in downtown Green Bay, so they opted to say their “I do’s” at Meyer Theatre, followed by a reception at Titletown Brewing Co.’s banquet space and a few snaps on the brewery’s rooftop.
Photos by Kasey + Ben Photography

Another reason Green Bay rocked their world on their wedding day: “My wife is a huge Packers fan. We were able to have photos taken at Lambeau,” says Le Capitaine.

(Above) The ultimate reception venue for football fans: Lambeau Field. The scoreboard spells out words of congratulations for picture-perfect photo ops. Photo by Defining 78 Photography

Lambeau Field
As the Green Bay Packers’ home field, couples can take wedding photos in the seats or near the field. Choose from a dozen on-site venues for exchanging vows and hosting a meal.

Gather on Broadway
The 5,550-square-foot space touts its industrial aesthetic with exposed-brick walls and steel beams, plus a commercial kitchen and cocktail reception area to appeal to gourmet couples.

National Railroad Museum
Host an intimate rehearsal dinner aboard the 1930s Silver Spirit Train, a former dining car, or host a party for up to 300 in the Frederick J. Lenfestey Center.

Titletown Brewing Co.
Show your love for local brew with a wedding reception in this microbrewery’s banquet space, in the former Larsen vegetable-canning building.

Meyer Theatre
Say your vows on stage in this dramatic 1930s theater, as your guests watch from the rows of red-velvet seats.

Places to Go, Things to Do
Ideas for wedding-week activities in Green Bay.

Wedding planner Allison Kline-Weichelt of Sash & Bow has helped many couples pull off the perfect wedding weekend in Green Bay. Here are some of her top picks.

Start with a bachelor or bachelorette party, or a more casual gathering of pals, at creative spots like Hello Lemon Studios (“Get your crafty side on before hitting the town,” says Kline-Weichelt.), or one of the city’s five breweries, like Titletown Brewing Co. or Hinterland Brewery. There are endless opportunities for guests to connect.

Pre-wedding pampering or day-of services at the Day Spa—with a cottage just for groups and can also arrange a bloody Mary or mimosa bar—might include mini treatments like a foot massage or make-up application.

Packers fans can take advantage of down time with a tour of Lambeau Field or the Hall of Fame, also at the stadium.

For a decadent morning-after brunch, try A’Bravo Bistro & Wine Bar; its range of dishes can easily satisfy differing palates, from a bacon-and-blue-cheese scrambler to roasted-berry crêpes, and chocolate-chip French toast for younger guests. The Creamery—an artisan-minded cafe in downtown Green Bay—is “an intimate small space that offers a huge variety of eggs benedict,” says Kline-Weichelt. Runaway Spoon Catering is a top pick for bringing an amazing meal to your location.