With offerings from sweet to savory served by chefs who’ll engage with your guests, food stations are back in vogue to please every palate.
By:
Kristine Hansen
Issue:
Fall/Winter 2019 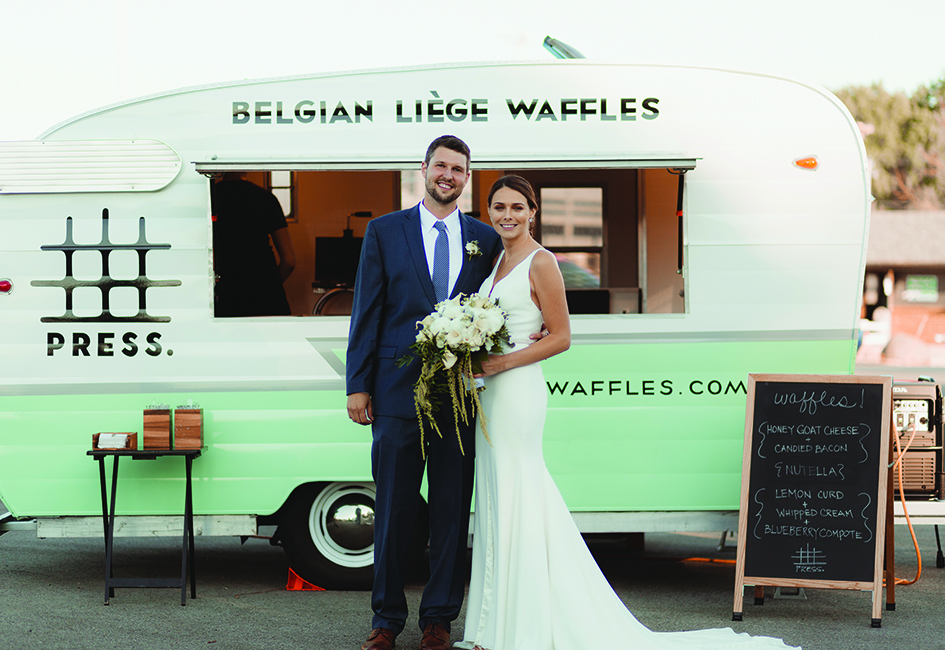 Food stations at weddings aren’t new—but theatrical presentation, dozens of toppings and guest-friendly chefs are. When you plan it right, friends and family will feel like they’re watching a Food Network show, with plenty of opportunities to Instagram their DIY food creations.

Meet the “second wave” of food stations, according to David Porto, owner of Blue Plate Catering in Madison.

Food stations aren’t necessarily a huge budget saver compared with the traditional plated meal, because you need more food and more staff, Porto notes, but they’re not outrageously priced. “It doesn’t need to be that much more.”

Carving stations, with generous cuts of ham or spice-rubbed tenderloin sliced to order, have been a standby for years, but now food station options are endless. “Many couples pick their favorite item, like mac and cheese,” Porto says. 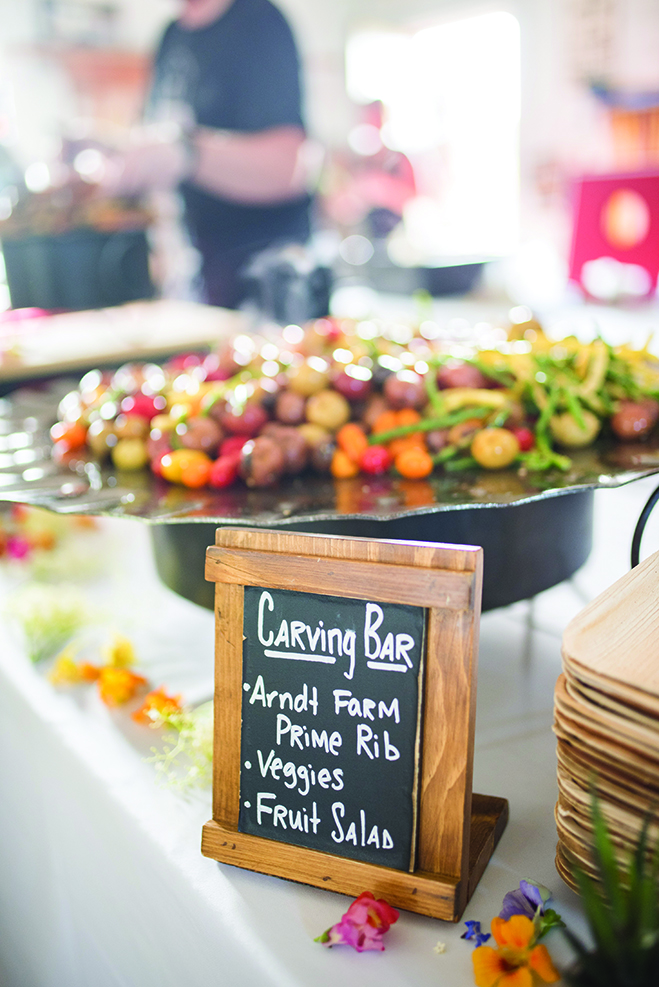 Courtesy of Tall Guy and a Grill

Adventurous Dining
Food stations allow variety and can reflect a couple’s personality. Maybe you enjoyed late-night tacos after a movie on your first date, or you break out the ice cream and build a sundae whenever one of you has a bad day; including favorite foods in the reception helps share your love story.

This dining option can also provide nontraditional offerings—people are often more willing to try new things when they’re having a good time at a happy event like your wedding. Guests who are timid about new foods, especially ethnic cuisine, can see the ingredients first, ask questions or witness the preparation. Asking the chef about the level of spiciness, sweetness, saltiness or even texture prepares the palate for adventure and takes away some of the uncertainty, says Dan Nowak, owner of Tall Guy and a Grill in West Allis.

Options for adventure? Tall Guy and a Grill offers ramen noodles that can be customized with different broths, meats and veggies, as well as a station for bao (steamed buns containing house-smoked brisket or pork belly and Asian-style pickled vegetables).

“People are really wanting to see their food being made or something interactive,” says Nowak. “A lot of couples will say, ‘This is what we want, but we know our family is going to want steak and potatoes.’” Food stations, with their wide variety of cuisine and new twists on the tried and true, offer a compromise. Or you can add “a modern twist on something that’s traditional,” he says. For example, his company offers a mashed-potato bar with a range of toppings with a local touch, like locally sourced Nueske’s bacon and Wisconsin cheddar. 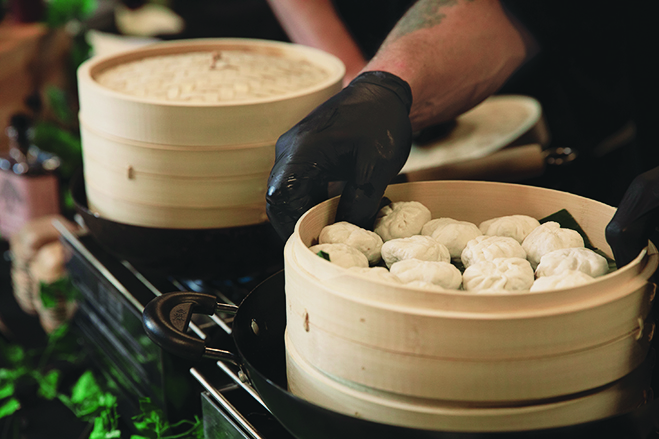 Ideal Venues
Food stations encourage guests to mix and mingle, a trademark of locales that are more casual and relaxed. They tend to blend in well at urban venues with exposed-brick walls, warm tones and woodwork, or rustic barns, says Nowak.

However, it’s important to consider how much space you have to work with. People chatting with chefs makes the event more memorable, but it can sometimes create lines. “You don’t want food stations to be intrusive,” says Anderson—so beware a tight, already-cramped, space; it could spell trouble.

Size of the venue should also be a consideration. “There are not a lot of venues that are large enough for the stations we put out,” says Anderson. She points to Milwaukee locations like the Pritzlaff Building, Turner Hall and Jan Serr Studio, with “lots of nooks and crannies,” which are particularly accommodating for this kind of setup.

Brunch Solution
For couples planning a brunch-time wedding reception, stations work beautifully. Consider breakfast foods such as omelets and topping-friendly items that can be customized for each guest.

“Different plays on crêpes, pancake and waffles” are usually a hit, says Anderson. “You can flavor them any way you like.”

That’s also where Press. Waffles of Milwaukee fits in. Emily Thomas and Aaron Rosko can park their vintage camper (a 1962 white-and-mint-green trailer) at reception venues and serve Belgian Liège-style waffles out of that, set up a station inside the venue or provide drop-off service for a DIY waffle station.

“We’ve seen a trend in brunch weddings,” says Thomas. The trailer is a fun option for summer and early fall, “but setting up indoors has worked really well, too.” To avoid overload, giving guests limited options—for example, a waffle with Nutella, fruit and whipped cream and another with chutney and goat cheese—seems to work best, say Thomas and Rosko. They can also offer a specialty topping chosen by the couple, and are happy to make suggestions for topping combinations.

“We’ve done this anywhere from campgrounds to the Pfister Hotel,” says Rosko. Barns also lend themselves to a waffle bar, complete with the trailer. But Press. Waffles isn’t limited to the first half of the day. “Dessert and late-night has been the biggest market for us,” says Thomas. And, come 2020, a second trailer, currently under renovation, will be used exclusively at weddings and catered events. 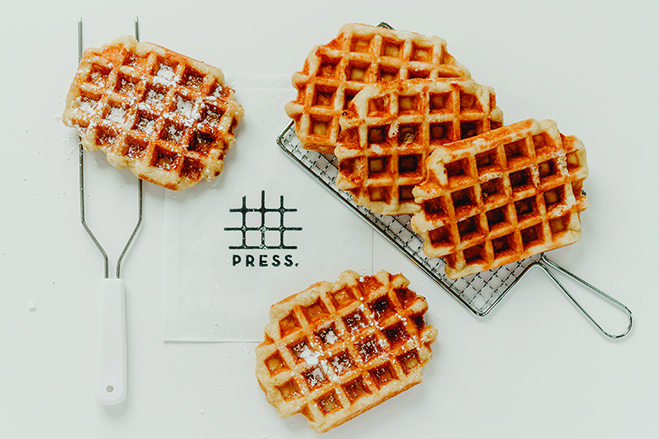 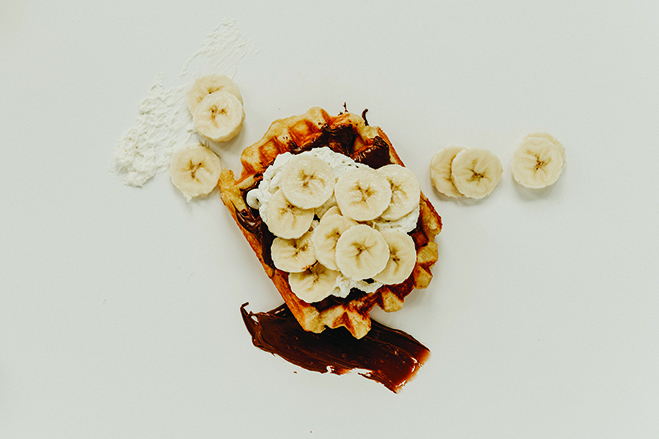 Creative Spins
Porto says that while typical savory food stations—brats, tacos, baked potatoes and so on—are still popular, there has been a shift to embrace options that mirror the local dining scene.

It’s no secret that sushi restaurants are now as commonplace as steakhouses. Blue Plate Catering plans to fulfill one couple’s wish for a sushi station at their wedding this fall, thanks to three sushi chefs—who will keep guests entertained as they assemble the selections.

Various kinds of sliders with a mix of condiments are on the rise, and a mac-and-cheese bar has been “insanely popular,” Porto says. “Tacos are great because you can do so many varieties,” including adding Korean or Vietnamese cuisine to the mix.

But really, the sky is the limit. In some cases, food stations can even transform a menu from blah to brilliant. At a January wedding in Baraboo for 175 guests, Blue Plate Catering worked with a couple who were planning a buffet, but switched to food stations to better showcase their tastes. Three stations—carving meats with salads, a “mac and mash” station, and artisan tacos—satisfied this concern. “On the day of the wedding,” says Porto, “it was really enjoyable to see them say, ‘This is what we wanted.’”